Hey there, Blogspot. We're back in the swing and got a new thing!

Denton TX's VIDEO began intending to sound like a mix between CRIME, CHROME, and CREAM. However, the twelve songs on this debut LP, "LEATHER LEATHER", end up sounding like your record collection melted into one solid album. Ranging from songs that have the primal pounding of FLIPPER, the space jam sessions of HAWKWIND, and the lyrical bent of early ALICE COOPER and STICK MEN WITH RAY GUNS, VIDEO's debut album should shatter all preconceptions of what Denton's punk scene can produce.

Featuring members of THE WAX MUSEUMS, BAD SPORTS, WICCANS, SILVER SHAMPOO, and as many other bands that you can name, "LEATHER LEATHER" breaks the mold of the usual poppy, melodic punk and instead forges a new territory somewhere between punk, hard rock, and weirdo psych. To borrow from the venerable BOBBY SOXX, "Fuck powerpop! Fuck new wave! This is punk rock, you're a slave!"

Keeping the spirit of the band's namesake alive, the vinyl edition of this record is 100% ANALOGUE. No computers in any step. Recorded on tape by ORVILLE NEELEY (Bad Sports, OBN III's, etc) in October 2010, a mixing session with DAVID WILLINGHAM at The Echo Lab, and cut direct from tape, PLAY PINBALL! RECORDS is shamelessly proud to unleash this disease known as VIDEO unto the world. Long live the New Faith. Long live VIDEO.

Also available on the digital hellscape of iTunes.

Orders are Shipping! and other updates.

And they have been for a couple weeks now, just putting an update in this rusty old blogspot for posterity sake. We have a few Fungi Girls copies left for Denton customers on "friends of pinball purple" vinyl, down to the last couple though and then we're onto black only for everyone.

Today we got a mastered production CD for Denton Denton USA to send out to be cut and plated. Big thanks to David Willingham of the Echo Lab for doing such a great job and helping us get this sucker out the door. It sounds fantastic and we have some really incredible songs on there. Crossing our fingers we can get some copies out by the Wax Museums show on the 14th of November, but we're not making any promises.

In other news, we have a couple more releases coming up after Denton Denton USA, we're working on a 7" by Toronto's "First Base" and a cassette by New Orleans newest hit writer, "Little Hammer." Look for more details soon, and as always, you can find any of our releases at

As of 30 minutes ago, you can PRE-ORDER the FIRST RELEASE on PLAY PINBALL! RECORDS and the first release from Fungi Girls, their full-length "Seafaring Pyramids"! Our web store is here:

What the fuck do internet-era kids do when they're growing up in the middle of nowhere with an understanding of great music? What do they do when they're cuttin' their teeth on records that took you (and us) years to get into? What do you do when you're desperate to leave the dunkest of the podunk towns you're stuck in and find all that punk, stoner rock, indie and surf music you've only heard from some weirdo record collector who beats off to your myspace pictures? Where does that leave you when you're too young to even drive to a show you were booked on?

It leaves you to get high and try and capture everything you've heard with everything you can get your hands on. In doing so, Fungi Girls have recorded a blistering album of concise and experimental songs ranging from shoegazing grooves and stoner rock riffage to psychedelic pop freakouts, channeling everything their teenage brains can handle. Eight songs round out their debut LP recorded and produced by Jason Kelly (The Wax Museums, Fergus & Geronimo) in March and June of 2009. LP limited to 500 Copies (400 black vinyl, 50 blue vinyl, 50 gold vinyl...though there might be some blends) on 150 gram at 45RPM. Ships late Sept./early Oct.

The pre-orders will get priority on the color copies (duh!). We're brand-fucking-new at this stuff, (but don't worry, we know how orders and the post office work) so distros please contact us if you're interested! 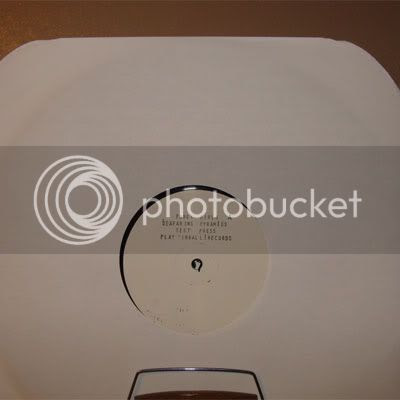 Hey everyone, good news! We got the Fungi Girls test presses in! And so far they're sounding great to us, we've approved art for the jackets and they are currently being made for both releases. Last night our shirts came in as well and are looking hot, we should be putting em all up in the store for order soon.
Deliveries in Denton will be made personally to your door.
We also will soon be able to start taking orders from our new online store at
http://playpinballrecords.bigcartel.com/
Posted by Anonymous at 12:52 AM No comments:

Gonna have some Fungi Girls "Seafaring Pyramids" CD's made up. Not nearly as many as the LP though, so if you want one, you'll have to act fast! I spent a good god damn portion of today hand cutting the art for the jewel cases. 47 done...might do some more if I can find more empty jewel cases around. If I could find my camera, I'd post a pic of the pile, but what? Do you expect me to go look for it?
Posted by Chris Iceberg at 9:25 PM No comments:

Status Update: Our first release, Fungi Girls' "Seafaring Pyramids" is currently out to be cut and plated, hopefully it gets done soon, looking forward to hearing these jams in a physical form. The boys got some slammin' artwork done for the jacket from Carlos Ruiz, who's done art for Times New Viking, Los Campesinos, Davila 666 and more up in Seattle, WA.

Other releases we're working on are shaping up, we're currently banging out the final art, sequencing and submissions for Denton Denton USA, our compilation LP of Denton rock and roll. We hope to have everything submitted and mastered shortly.

We're also having a small run of T-shirts printed up by our good friend Drew of the Play Pinball! Records Cougar, reports say they're looking hot. Keep an eye out, and soon you'll be able to tame the beast in style.  We're gonna do up a bunch of these DIY-style to make them custom/one-of-a-kind versions too, so don't just think black on white is all you can get!  We'll probably have some other colors available too.

Posted by Pinball! Records at 9:22 AM No comments: 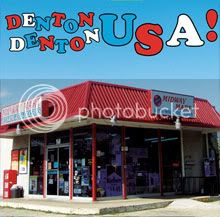